The list of finalists for the Fun & Serious Titanium Awards includes some clear favourites and a few surprises for the best games of the year.

The European video game festival’s awards will be delivered during the closing ceremony at the Guggenheim Museum Bilbao on 10 December.

Assassin´s Creed Odyssey (Ubisoft) and God of War have the most nominations, with six each, followed by Red Dead Redemption 2, which has five.

Indie game Return of the Obra Dinn takes a spot amongst the candidates for Game of the year, where it is set to compete against blockbusters such as Assassins Creed Odyssey, God of War, Marvel´s Spider-Man and Red Dead Redemption 2.

The list of finalists in the different award categories for the now veteran Fun & Serious Game Festival in Bilbao has just been released, and includes essential titles for video game enthusiasts and also a few interesting surprises. As in previous years, the Titanium Awards will be presented during the customary festival gala at the atrium of the Guggenheim Museum, on Monday 10 December. Where Brenda Romero, Jade Raymond and Fumito Ueda are also set to receive honorary awards – an event attended by authentic sector icons over the past seven years, such as Jeff Kaplan, Jordan Mechner, Tim Schafer, Yuji Naka, Alexey Pajitnov, Warren Spector, and Peter Molyneux.

Two historical action games have the most nominations (with 6 each): Assassin´s Creed Odyssey – the latest offering from the Ubisoft franchise, set in Greece during the Flavian dynasty; and God of War (Sony) – which follows the vicissitudes of Kratos, the Spartan demigod. Followed by the hotly awaited western sequel Red Dead Redemption 2 (with five nominations for a Titanium) and Marvel´s Spider-Man y Return of the Obra Fynn (with 4 nominations each), as favourites on the panel’s ‘short-list’ of finalists.

Indie game Return of the Obra Dinn is one of the finalists for Game of the year, set to compete against giants such as Assassins Creed Odyssey, God of War, Marvel´s Spider-Man and Red Dead Redemption 2.

Monochrome murder mystery Return of the Obra Dinn from Lucas Pope, which delves into the fate of the 60 crew missing from a ship following its return to port, has also been nominated in the category for Best Indie Video Game (and competes against Minit, Into the Breach – also nominated for Best Game Design – Celeste and Red Strings Club). It is also in the running for Titanium Awards in the Best Narrative Design and Best Game Design categories.

Quantic Dream’s dystopian futuristic game Detroit Become Human obtains the first of its nominations for the award for narrative care and attention and playability (Best Narrative Design). And competes against Assassin´s Creed Odyssey, God of War, Return of the Obra Dinn and Read Dead Redemption 2.

The finalists for Best Game Design include two indie games, Return of the Obra Dinn and Into the Breach, in addition to God of War, Red Dead Redemption 2 and Assassin´s Creed Odyssey.

Nominees for the Award for Best Original Soundtrack, include notable musical soundtracks by Bear McCreary for God of War, by Joe Hisaishi for Ni No Kuni 2, Woody Jackson for Red Dead Redemption 2, Austin Wintory for The Banner Saga 3 and John Paesano for Marvel´s Spider-Man.

And the Role-Playing Game category, which gains autonomy and its own Titanium award this year, includes Ni No Kuni 2 (with its second nomination), Dragon Quest XI, Kingdom Come Deliverance, Vampyr and Monster Hunter World.

Nominees for the Award for Best Family/Social Game, which rewards games that promote group playing for all ages, now in its eighth year at F&S, include Sea of Thieves, Unravel 2, Starlink Battle for Atlas and Super Mario Party.

As already mentioned, this year’s Honorary Awards go to Brenda Romero (a significant figure above all in the role-playing genre with her contributions to Wizalry and another 47 titles, including The Mansion, Dungeons & Dragos: Heroes y Jagged Alliance) Jade Raymond (who played a key role in the industry as the producer of such relevant titles as Assassin’s Creed, Watch Dogs, o Splinter Cell: Blacklist de Tom Clancy) and Fumito Ueda, creator of ICO, Shadow of the Colossus and The Last Guardian.

Please find below the full list of games that will compete for the trophies in each category during the Fun & Serious Game Festival Awards Gala, which is set to take place at the Guggenheim Museum Bilbao on 10 December 2018.

GAME OF THE YEAR

HONORABLE AWARD TO A WHOLE SAGA 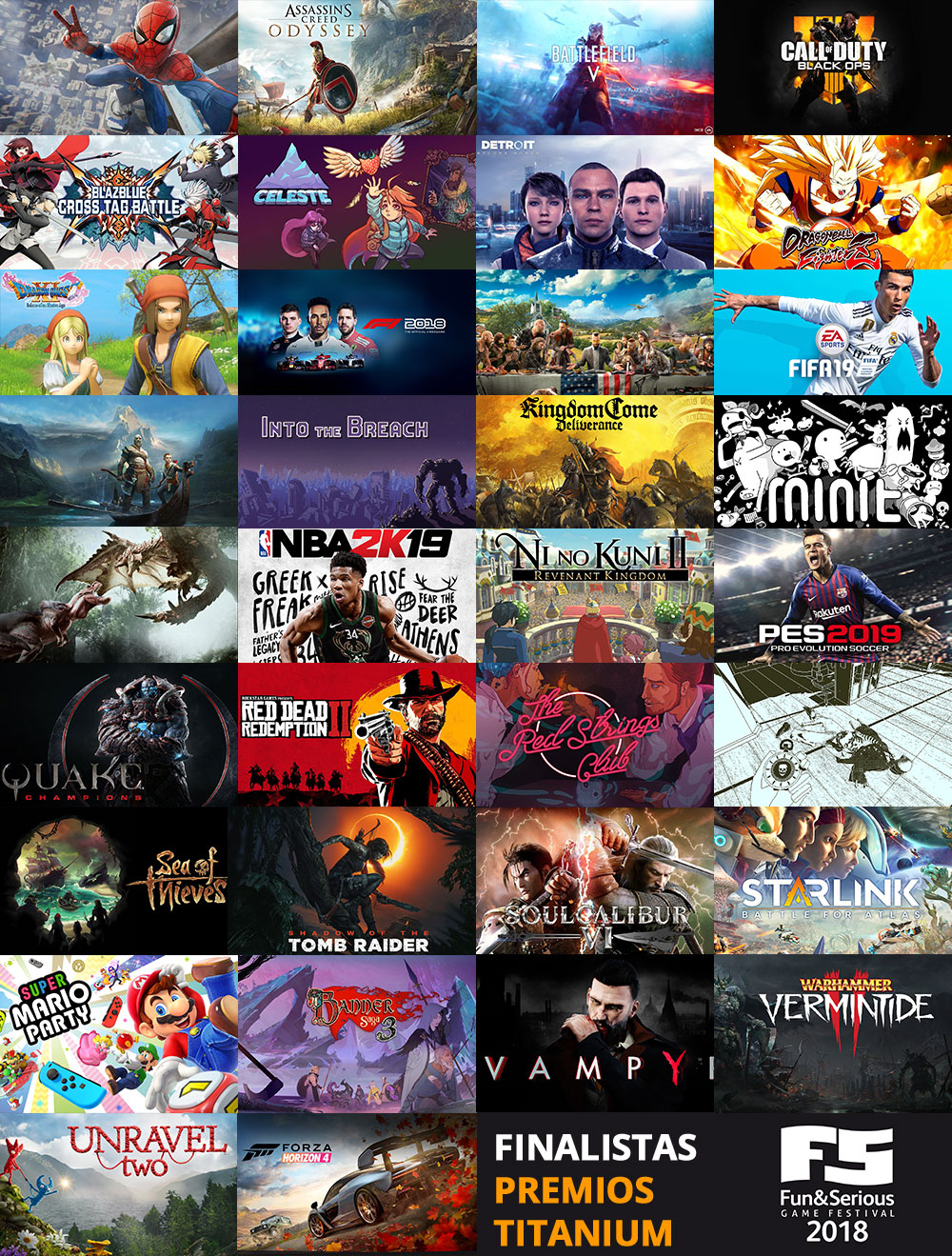